Somehow there seems to be a relation between those two. After our last dinner together with Tamora, Papillon and Mares, the owner of the restaurant gave us a big bag of coconuts. Since then we sometimes heard a faint scratching or crawling behind the walls and in some of our lockers. Could it be possible ? Did we finally manage to establish cockroaches on board ? No. The trail of small, black excrements we found the next morning made it clear: a rodent of medium size found a new home on the Rancho Relaxo !
The kids immediately liked the idea of a new pet, named it ‘Elvis’ and wanted to build a small Lego house for the rat. But the capitana threatened to move out: “Either Elvis moves, or I do !” So it was that the skipper and the two short ones went into the village to search for a trap. It wasn’t too easy to find it, but we finally came back home with the classic model with an extra strong spring. That should work !
Back on bord, the situation got more complicated: The capitana got a terrible stomach ache and despite us having different causes in mind, in the end it was the disgust of the rat that caused her stomach cramps. In the evening we put a small piece of cheese in the trap and everyone went to bed quite excited.
Big disapointment on the next morning: The trap went off but was empty ! – No trace of Elvis. Or actually that’s not true as he ate the cheese and then feasted on a bunch of bananas that the careless crew forgot on the saloon table. 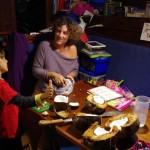 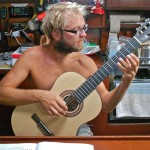 The day passes with a lot of music. As planned, the skipper started to learn Guitar when entering the Pacific. The kids accompany his first musical steps with melodica and E-piano. All that while in the aft, the capitana arches because of her stomache cramps.
But this night we have a different plan: As Elvis obviously enjoys a very healthy diet, we’ll put a piece of banana in the trap and place that on the saloon table. To help the crew get sleepy we finally do a movie night – it’s been a long time. At 22hrs everybody is in the bunks and fast asleep.

At around 03h in the morning, the always watchful skipper awakenes and has to pee… – As I weasel through the dark saloon I noticed the trap has moved slightly ! And in the faint moonlight I thought I could see something small and round beside the trap. Maybe Elvis isn’t all that clever and we… I turn on the light and see the rat run to the far side of the saloon table. He again managed to get the food out of the trap and he only lost ONE whisker (!) when the trap snapped ! But now he’s behaving like most Galapagos animals and shows no fear of humans. He just sits at the table and stares at me while I – without turning away my eyes, I reach behind my back to get the machete we used the evening bevore to open coconuts. I lift it above my head – one stoke ! And I put a 1cm deep cut into our saloon table – and Elvis does his last twitch. I throw our former crew member over bord and hear the capitana sigh in her sleep. Next day her stomach ache is gone.

What I find funny about this somehow morbid story: The Galapagos are some of the strictest islands when it comes to quarantine rules. It’s pretty impossible to enter these islands with an animal aboard. Even to bring fruit or vegetables is not always easy. But it is exactly here that we and the SY Mares managed to get a rat on our ships. Hmmm. Maybe we should reverse those quarantine rules to protect the sailors ?

This entry was posted in Animals, Learning for life, LosLocos, Pics, Rancho Relaxo. Bookmark the permalink.