Our fuel problems are not yet finished. Actually today we should have got Diesel and Gasoline… The Gasoline was dark-grey – looked as if someone used it to clean engine parts. And the Diesel ? Well, I put a few liters in an empty jerrycan and put a little fuel treatment on it. Only two hours later I could see the water, bacteria and dirt seperating from the fuel. So all the Diesel and Gasoline went back – we already got enough problems. 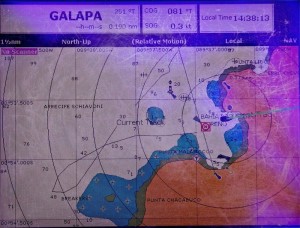 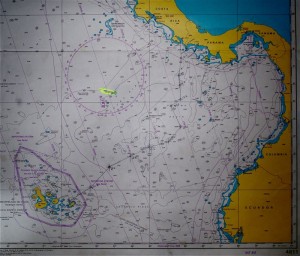 Thanks to the dirty Diesel it is that a few days ago we had to enter the anchorage of San Cristobal without engine. The main sail was just put away and we were about to turn portside into the harbour when the engine died. We quickly got the Genoa out and put up the main sail again, after which we came about and set a course upwind, passing the first reef and closing in on the second shoal. After passing that one, we steered hard on the wind to get to a good position in the anchorage. Passing in between the many charter boats. – Should be ok. But what’s that ? Why is that ship (at anchor !) moving forward ?!? No, now we can’t pass in front, whe have to go behind it. But will we have enough room to get to our anchor position ? 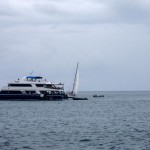 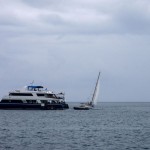 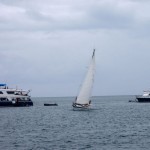 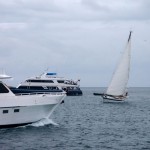 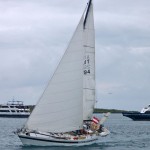 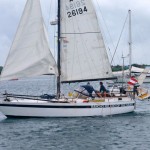 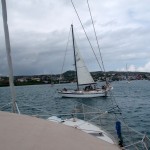 So we pass at the stern. And we hardly have enough room to pass the SY Mares. But it’s ok. We remove the Genoa, continue for a few meters, luff up and throw the anchor. It grabs ! We lower the sail and open a beer. Yay ! We made it to Galapagos – action included !

And tomorrow I’ll again have a look at our fuel filters. Probably they are again cloaked with bacteria-mud.  What can we do ? Maybe a few bottles of Grotamar82 will fall from the sky ? Otherwise, we’ll try to use the engine as little as possible and try not to depend on it. Maybe I can install a little 3-way-valve and put a small 10l tank above the engine. That should be enough for emergencies and is easier to clean – and keep clean. Let’s see, whether I can find the parts for that here on Galapagos.

Thanks, SY Mares for the pictures !

This entry was posted in Learning for life, LosLocos, Pics, Rancho Relaxo, Sailing. Bookmark the permalink.

One Response to Funny anchoring without engine