No, no, no ! Don’t you be worried ! Although having been seperated from my loved ones for more than a month now, the psyche of the skipper is still in good shape. Turbulent was the weather which got affected by a tropical depression during these last days. That’s why I’ll do another post with pics of wind and rain. 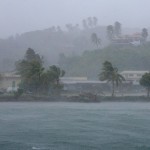 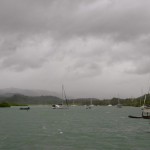 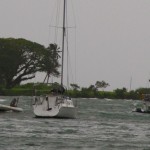 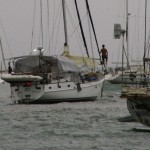 After being at anchor out at the reef for more than two weeks, a few days in Savusavu are a welcomed change. Because of the forecast I took down the big sunroof and gave it to a local tailor to stich up a few holes. Then we wait for the wind. The weather prediction was spot-on and despite being well protected behind the little island, we still had a constant 30 knots with gusts reaching into the 50ies. 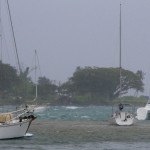 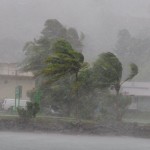 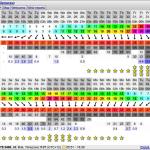 It wasn’t too easy doing pictures with the rain coming in horizontally and the light being only slightly above candlelight-level while working mostly with maximum zoom. It was a lot easier on the next day, during the ‘golden hour’ when the water level was at it’s high and we could watch as an australian yacht was pulled out of the mud. 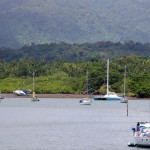 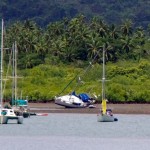 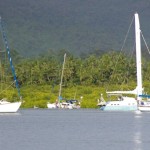 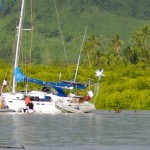 The Beneteau somehow got the mooring line around the keel and shaved through it after which the boat was adrift and ended up close to the mangroves. That was pretty lucky – as there is enough coral around to split the thin fibreglass hull. But the lucky boat got stuck in soft mud and could be towed out at the next high tide without any further damage. Two dinghies and a boston whaler from the local perl farm pulled on the mast to lift the keel out of the mud and a dive boat with 500hp pulled the yacht into deeper water. 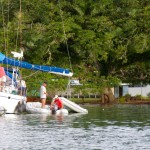 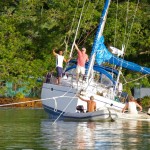 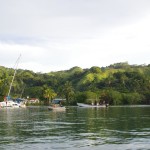 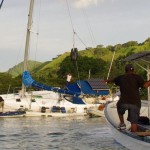 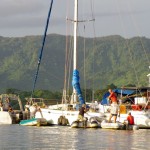 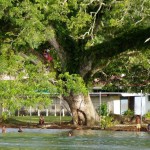 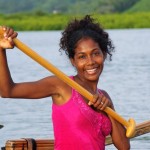 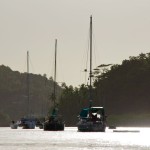 Uh ! And I’ve even got more good news: After waiting for eight weeks, yesterday my christmas parcel finally arrived !!  After months I’ve finally got a decent computer again. Yay !

My old MacBook Pro died in the caribbean when a glass of water was spilled over it. The replacement, a MacBook Air killed itself when the internal (SSD-) harddrive got knocked out. So I had to use the ship’s navigation computer, an old Asus EeePC. It’s a nice little laptop that draws nearly no power but for working with pictures and videos it’s the wrong equipment. That’s why I’m as happy as a child on christmas day to finally have a decent laptop that won’t lag behind when I’m typing my blog posts. Maybe it also has positive influence on the frequency of updates. Only two posts duting the last month ?!? That’s an all-time low, I better start writing again…

Wow ! A week has already passed ! Tomorrow I’ll sail the Rancho Relaxo towards Casa de Campo marina to pick up my loved ones in the afternoon.

Not much has happened the last days. I got about 20 kilo clothes washed, dried and stowed away. Today I cleaned the ship on the inside and repaired a few little things. Finally I found the little crack in a waterfilter that got replaced, a vent of the engine broke and was repaired. And the funniest thing: Just before leaving Viola or Bruno put a lock-code on my iPod ! – Couldn’t use it anymore. ARRR !! The only chance would be to connect it to the computer it was first synced with (which doesn’t exist anymore) or to erase and reprogram it – resulting in the loss of about 55GB of good music. So I tried all of the 9999 possible combinations to the lock. Since Bruno mentioned that it was something with nines, I started from the back. 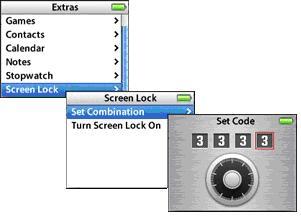 As I’m trying to stay 100% Windows-free also when under sail, I previously used Linux and Wine to communicate via HAMradio. Now I’ve got the time to try around using Mac OS X and have managed to get everything in working order. Which means, you can use Airmail3 more or less natively under OS X without a seperate Windows installation or partition. Here’s how I did it:

Install in that order: PlayonMac, XQuartz, Wine. The last two components can be installed directly from PlayonMac. Once that is complete, get Airmail3 and install it by double-clicking it’s icon. It should be started/installed via PlayonMac. I’m using the version 3.3.081 which also includes the drivers for the Pactor modem. Install those drivers during the initial installation of Airmail3. If you want to get the propagation automagically from inside Airmail, you’ve got to install the (seperate) propagation programm: Open PlayonMac and run a ‘exe-File’ in the same virtual drive, you’ve installed Airmail in ! It has to be the same drive because otherwise Airmail will not be able to find that software. 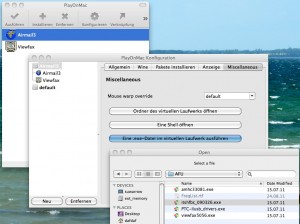 Now that everything is installed, it’s time to configure the connection Bluetooth-Modem Wine. First the modem has to be paired with OS X. This is done using the Bluetooth-Assistant. The only thing of importance here: Use a ‘user-defined’ pairing-string ! It’s the last eight letters of your modem’s serial number which can be found on the underside of it. Be sure to use the correct upper/lowercase spelling – otherwise it won’t work. Once the Bluetooth-pairing is done, the connection can be tested by opening a Terminal-window (to be found in Applications -> Utilities) and typing the command: cat /dev/tty.SCSPTC-IIusb-COM1
After a short delay, the init-string of the modem should be printed. Now you can close that Terminal window. Attention: If you’ve played around with your Bluetooth-Setup and/or re-installed that modem or whatever… The name of the device can be slightly different. Use ‘/dev/tty.SCSPTC-IIusb-COM1-1′ of whatever is your correct device name.

Now you have to create a COM-port for use in Wine: Start PlayonMac, enter the Configuration and use the Button ‘open a shell’ in the tab ‘Miscellaneous’. A little shell-window will open, in which you have to type the following commandos: 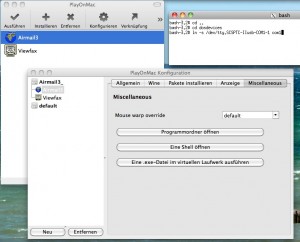 This will create the needed COM-port for Wine. Now you can close PlayonMac and start Airmail3. Beside your usual settings, only one thing is really important: The Bluetooth-connection seems to be a bit sluggish and therefore Airmail will not be able to communicate correctly with your modem. You can solve this by going to Tools -> Options… Connection -> Advanced Settings and enable the option named ‘Ignore com-port CTS Signal’. If you now start the Terminal, the init-string of the modem should show after about 20 seconds. 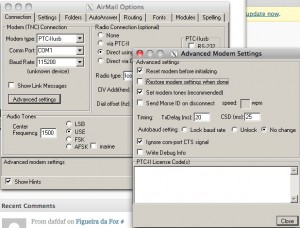 Success !! You’ve got Airmail3 running under OSX with a working Bluetooth connection. Yay ! 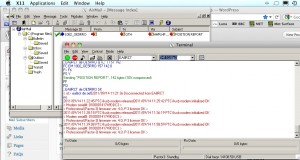 On saturday I did a few first steps in short wave technology. One of the basics is to be able to receive a wather fax. This is hardly anything new. People have been doing that since the eighties. The thing is: I don’t have a shortware tranceiver and I don’t have a Windows(TM) PC.

So I coupled my trusty handheld SW radio with my MacBook using a 3.5mm ‘headphone’ cable. The software I was using/testing was: CocoaModem 2.0, Fldigi 3.2 and MultiMode Cocoa. After fiddling around with the receiver (using mode: USB) I finally received a faint signal. But that was enough to pull that first weather fax from Northwood, UK !

It’s actually quite amazing that one can receive quite precious data using only standard components and free software – without internet, telephone, WiFi… Well. It was only a test for getting used with the software. The final setup will hopefully consist of a proper tranceiver and a dedicated small Netbook or Laptop with all software installed and configured. Unfortunately the ONLY piece of software that doesn’t exist on Linux or Mac is the SailMail program for sending/receiving emails via SSB. But maybe I can find a solution for that, too. 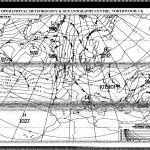 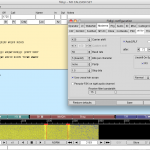 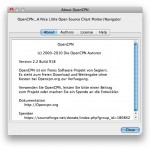 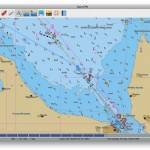