A little Front – in pictures

Finally an action post for the sailors that read our blog.

On our way towards Tonga we ran into a front / through. As the thing really looked weird on our weather maps we prepared ourselfes for the worst – and pretty much got it. Luckily for us, the storm hit during daylight which is a lot less freightening than having strong winds in the pitch black night. Lucky for you too as you get some scary pictures (and maybe a video later on). 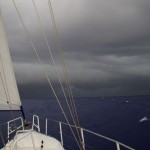 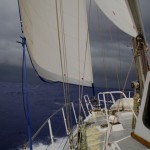 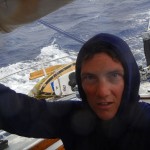 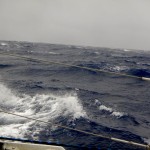 The front was clearly visible in the morning after breakfast and when it hit, the wind turned 180 degrees and increased to about 40 knots at which it stayed pretty much all day. After a few hours, the sea picked up and nearing the end of the storm we had waves reaching well above five meters. Despite the rough seas we still did 4-5 knots, going against the wind with the main and genoa in the third reef.

Slightly further south it was even worse. We heard of yachts that encountered more than 50 knots of wind just 50 miles south of our position. 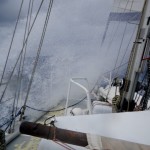 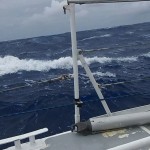 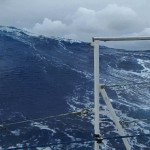 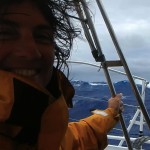 The damage: one genoa sheet was nearly shaved through and again we made lots of water. The most of it in the lazarette but not as much as previously in the living quarters. The sunbrella cover of our Genoa was already slightly damaged from all the flapping during the light wind sailing and the storm did some additional damage. But it’s already down and we gave it to the local sailmaker to re-stitch it. It should be fine again in one or two days. We had to use the autopilot for a few minutes while we put in another reef. Although it usually keeps the course quite well it managed to do a jibe (!!) while we were sailing on the wind. A jibe with 40 knots is not very nice and it tore out the stopper of the track of the main sheet. But that I can also repair easily. The culprit seems to be a faulty connection on the autopilot computer – a common fault, we learned. I’ll look into that during the next days too.

Compared to the other boats that came into harbour during the next days, we did pretty well. Other boats had their sails completely torn, blocks destroyed, hailyards snapped, etc. I don’t like cleaning the boat after an incident like that but if that’s all – I can live with it. And of course we will again improve and try to stop some more leaks that we found on hatches, vents, etc. 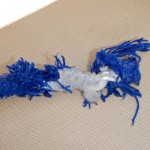 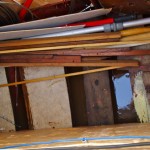 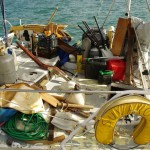 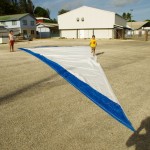 This entry was posted in Learning for life, LosLocos, Pics, Sailing, Suvarov, Travel. Bookmark the permalink.

4 Responses to A little Front – in pictures