Every day something to fix. Today: Outboard engine

Finally I get to post some more pictures that were made by the kids. I guess, I should do that more often.

Yesterday we had visitors from Germany who flew into Tahiti and will buy a boat here to sail it towards Australia during the next year. A very clever and interesting idea. So we had an endess talk and did a (quite late) bbq on the Rancho Relaxo. Also when taking them to the dinghy dock of the nearby marina – and then racing back through that enormous anchorage, two people shouted at me because our engine is really loud …and really broken. 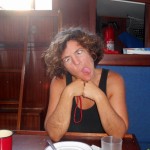 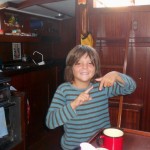 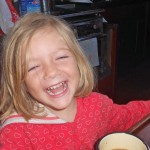 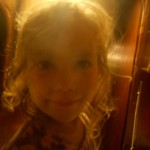 There seem to be quieter days but revently it seems that at least once a day something really important breaks. Yesterday it was the membrane of our watermaker (we don’t have replacement and will have to order it from somewhere abroad) and today it was the outboard engine. It was our friend Guenther who fixed the outboard when we were in Bequia but now it finally broke completely.

We didn’t use the big dinghy or the outboard during the last months but now we need it as the dinghy dock is quite far away and there’s no wind to sail with Pinguin. So we needed to repair it. As the shaft cannot really be fixed I just bent two pieces of  threaded rod around it and mounted the engine onto the holding clamps. Now we cannot move it up anymore but – who cares ? We also change the gear oil and cleaned the evaporator. Now it’s going full speed again. Yay ! 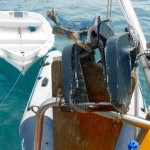 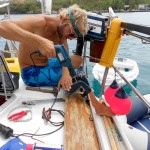 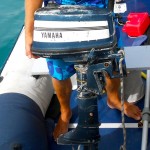 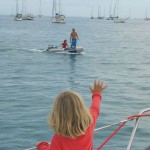 But during that work I really went nuts. When bending that brass rod around the engine I smashed my left thumb with the hammer after which I ran through the ship (towards the first aid box) shouting and kicking everything. So I broke both doors of the tools locker who happened to be in my way….