It’s one year that we left Berlin !

It’s a cliché: Cruisers loose track of time and don’t know what day of the week it is. But that’s not true. It’s WAY worse ! I sometimes have to think a long time to be sure what MONTH we have. This is mostly because we didn’t experience seasons for more than half a year but track rain- and hurricane seasons instead. After a while I figure out the month but definately have no idea what weekday or exact date we have. 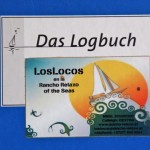 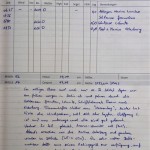 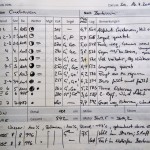 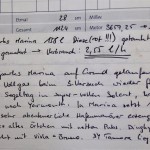 So it’s to no one’s surprise that we forget birthdays and not even realize that we’ve been underway for one year and five days already ! And thus it’s time for a little résumé.

But where should I begin ? As always, a few numbers will get me started: Since we left Berlin on the 2nd of June 2011, we’ve been sailing on 137 days and stayed at anchor on 228 days. In that time, we’ve covered 8843 nautical miles – or 16377 km – which is about a quarter of our planned route around the globe. 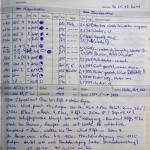 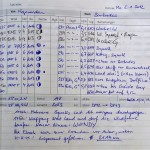 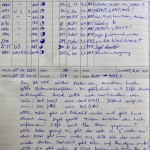 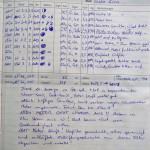 Many things have changed since we left. In the beginning it was quite hard for us to be comfortable with such little space and limited ressources. But now we’ve got used to this permanent living in camping-style.  We learned to cook with exoctic foods, learned to fish with the line or the harpoon and can fix things with improvised tools. Gui and me reallocated some of our body-fat and transformed some into muscles. So we didn’t really loose weight but feel a lot more fit and healthy. With the kids that’s not an issue but they are very happy and balanced and are never ill anymore. They enjoy being in the nature with the family and friends but they (and we) miss our family a lot and of course also our friends at home.

But the most change we experienced is in our sailing abilities. Gui and me both just have the minimum sailing-license and only had 2500nm (me) and 500nm (Gui) of sailing experience before we left. If it would’ve been 100nm, the difference wouldn’t have mattered because all we think to know about sailing, we learned on this trip ! A voyage of 50 miles was a long one when we left – now when we sail, say, from DomRep to Panama (800 miles) we hardly do any preparations. We leave as we are and don’t give it much thought, as we’ll be there in a week anyway. In the beginning we only felt safe and comfortable when we were in a marina or harbour; now we try to stay at anchor whenever we can. One has more privacy, doesn’t have to pay, the wind always comes from the front and one can jump into the water if it’s too hot.

If you would beam us back to Berlin right now – what would we do differently ? Well, we still would leave with all the chaos and a half-prepared ship as there is plenty of time underway to fix and improve things ! We would probably stay on sea until we reach La Coruña, maybe make a stopover in Morocco but then spend 4-5 months in Senegal, Gambier and Guinea Bissau ! Europe we’d skip entirely. There’s nothing new there – we know the culture, the cities, the people. It only got really interesting once we reached Cabo Verde. And  this archipelago really was one of the highlights of our journey so far.  The trip through the Caribbean was great, but we’d skip Barbados, Antigua and the DomRep and would spend a lot more time in Grenada and the Grenadines, probably go down to Tobago (not Trinidad !), Venezuela and Colombia. Yeyeye. Would, should, had…. Anyway: Afrika rocks !

In the end the route is not too important since most people will discover their real preference while underway and everyone will have different experiences. We had friends that we’ve saild with for quite some time and although we seem to get along very well, they sometimes hated a place that we loved and the other way around. I guess, everyone will discover different things, even in the same countries. Plans increasingly become subject to change, the longer one is underway. I think it’s good to have a general idea when one would like to be where, but don’t get too specific. The longer you’re underway, the more vague the plans get. Right now we’re thinking of spending the taifun season in the Tuamotus and plan for a work-stopover in New Zealand. Although we initially didn’t want to go there at all. What’s really gonna happen, you will probably be able to read here on this blog.

We would definately want to do the trip with the Rancho Relaxo of the Seas again ! The ship is absolutely amazing ! It’s got enough space for us and our things, sails not as slow as one would think and is strong as a tank – in short, we love it !

This entry was posted in Learning for life, LosLocos, Pics, Rancho Relaxo, Sailing. Bookmark the permalink.

3 Responses to It’s one year that we left Berlin !