Finished painting and ready to go

After our hardcore antifouling session I was unable to stop: I got rid of some rust spots and Harald welded some holes – not from rust, but from gear that was mounted on deck before. After that I put a few coats of primer but didn’t want to leave the job half finished. And as we’re waiting for the wind to pick up – I again started painting and during three days I could paint the whole deck. Now it’s nice, shiny and white. And on the inside the boat is a lot cooler. 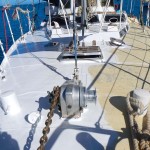 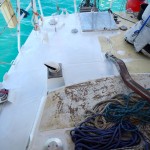 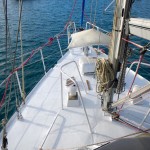 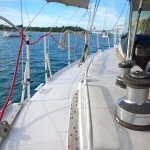 Maybe later on I’ll add some anti-slip paint but for now that will have to wait. Actually we’ll see on the coming voyage if that’s necessary at all. Speaking of: Yes, we’re ready to go out to sea ! Tomorrow, on sunday we’ll start the trip to Vanuatu. The destination is Port Vila where we will try to arrange our visas for Australia. After that we hopefully meet the SV Kira on the island of Tanna to climb the volcano together.

So tomorrow we’ll be out on sea again and probably do some posts via SSB.