Haul out and splash in less than one week

After our short break in Malolo Lailai (aka ‘Musket Cove’) our friends from the Time Lord had to leave. They wanted to haul out at Vuda Marina to check the hull for defects. We stayed for one more night but were too bored without the lovely norwegian family and decided to follow. First we made a little stop in front of Denarau where we dropped the anchor in 3m water in front of the Hilton Hotel. Next day we drove via Nadi to the Airport where I finally could get DHL to pick up my passport in Australia and deliver it to Fiji. Next day we left already to sail towards the Vuda Marina just a few miles to the north. 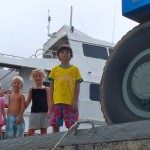 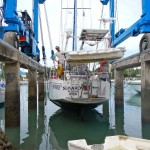 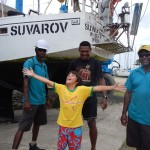 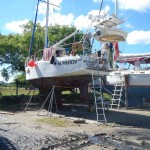 So finally we found ourselves in a marina – for the first time in … two years ! And man is that crowded here !! No space to breathe ! But as there also were ‘the french’ from the SV Elhaz in the marina and all the kids had so much fun together, we decided to stay for a few days. But on the hard: there is more room between the boats :-) and of course because we wanted to paint fresh antifouling. So we ended up in the travel lift and found ourselves again right next to the SV Time Lord.

Our poor friends found they had a lot to do on their boat: Huge parts of the hull had to be cut out. The previous owners never took care of the rust and so it developed to a point where the only solution is to just cut out and weld new pieces in. But a few weeks of grinding, welding and a sand blast later and the ship should be in good shape again. 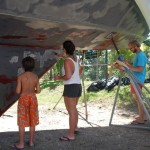 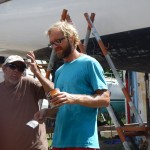 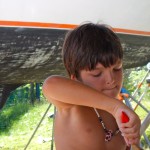 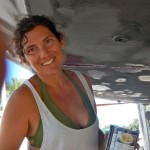 In the mean time we cleaned our hull, grinded the old antifouling away, put two new layers of primer and new antifouling. I used a pressure washer to remove all that loose paint our previous owner put on deck, then took care of some rust and finally put three coats of primer on top. But sadly my immigration permit expires on the 7th of May (yes, today) and so we have to leave Fiji….  More infos to follow in a few days.