Letting nature cook (for) us

The first days in Savusavu went by quite swiftly. The usual routine: getting the laundry done, some basic shopping, getting to know the village, etc.
As we determined before, the people of Fiji are extremely friendly, the Indian population is extremely enterprising and the Curries that one can eat at nearly every place are hot, delicious and affordable.

So the first impression is quite good. And that definately should be so as we’ll be here for the rain season which officially lasts until April. That doesn’t mean, we’ll be stuck here on the mooring but here we’ll have our base and hideout in case a taifun is announced. 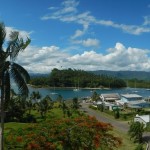 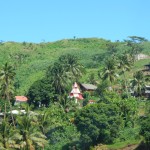 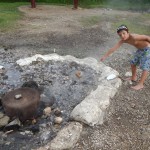 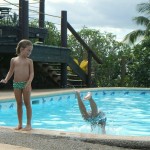 As most all hurrican holes, Savusavu has the downside of plentiful rain, slightly muddy water thanks to the mangroves and the bay-in-bay setup and of course: mosquitos.  Not exactly sexy. But it’s ok – especially since we discovered that hotel with a pool ! We’re kind of tolerated but also seemingly the only bathing guests anyway.  On the way towards the pool we got two breadfruits as a present and as our path led us by the hot springs, we dropped one into the boiling water. After our refreshing splash we came back to pick up the nature-boiled breadfruit. Yamyam !

This entry was posted in Kids, LosLocos, Pics. Bookmark the permalink.