After a few wonderful days in Bora Bora with our swedish friends we have to leave. Gui has an appointment with the immigration office to get her ‘carte de sejour’. And she really needs to be there in time as her flight to Argentina is only a couple of days away. I tell you that because actually – if I had the choice, I would have waited a few more days for a better wind. But we can’t and so we leave.
We exit the lagoon of Bora Bora through the only pass that is on the west side. And right here we can already see and feel the big, long swell coming in from the SW with a wave height of about 3 meters. In the beginning the wind is light and we glide along with four to five knots, slowly sailing southwards in the lee of Bora Bora. 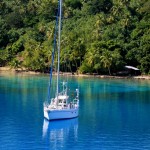 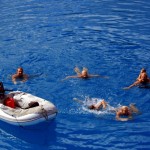 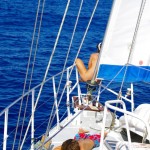 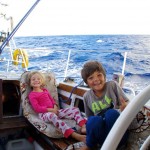 As the night approaches the wind increases slightly but it stays quite comfortable during the first 16 hours. The ‘Fleming’ windsteering is holding the course very well and as the sun rises and Gui comes up we do the first tack and head ENE. The whole trip was not just to have some great time and see those wonderful islands but also to do a proper testdrive with the Suvarov. And now, on the second day we shall see what the boat can handle. A few small rain fronts pass overhead and we bash through them with full sails – despite having wind with 30 to 35 knots. On our old boat, the Rancho Relaxo, we would have sailed with the main in the second reef and probably the small jib. But the Suvarov with her longer and much wider hull doesn’t even need a reef. We stay hard on the wind and accelerate to 8.5 knots without any problems.
But the wind generally increases and the sea gets wilder on the second day. So additionally to the swell coming from SW we have now steep and choppy mix with the windwaves that come from the SE. The Suvarov smashes through the waves, the spray covers the whole ship and we see the first drops of water coming in through a small window in the bathroom and the two deck vents in the saloon. We push some towels into the vents and solve that problem. 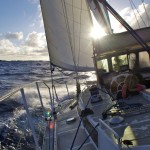 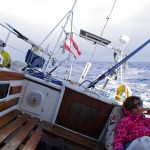 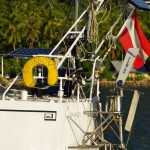 During the night the waves increase and every now and then the whole deck is covered with white water. Later at night I’m downstairs at the chart table doing a logbook entry as I hear some weird watery sound from the kitchen. Can it be the water running by the hull ? No. That sounds different. There’s also that distinct noise that floating cans make. I open up the floorboard and my heart drops in my pants as I see all our food floating around in the bilge. We’re taking on water !!! Damn ! I wake up Gui and ask her to start her watch a little early while I use a portable pump to get the water out of the ship. A little bit more and our batteries could be buried in seawater. Not good. Not good at all.
After a while the water level sinks to a few centimeters and the rest I have to get out using a sponge and a bucket. While I’m at it I see where the water comes from: a deck vent in the kitchen acts as funnel and with every wave we get a few liters of saltwater. *rrrr*
The vent we close with a rag and some duct tape, that’s no problem. But we have lost a lot of food and also some of my spare gear that was stored further in the front. A little more than three hours later the bilge is dry again and we don’t take on more water.
That’s one thing to do in the next days: to get rid of the leaking vents. And rinse the whole boat with freshwater. Uuuuh. A lot of work. But – hey – otherwise we had a good trip. The Suvarov proved herself as a tough ship that can handle some beating. The sail upwind was good, actually better than with our old boat. And we were quite fast as we did 234 miles in a little more than two days, going against rough seas and a wind with 20 to 30 knots average. Now we feel like sailors again and we know we also have a good ship ! Yay !

This entry was posted in Learning for life, LosLocos, Pics, Sailing. Bookmark the permalink.