Yesterday we said goodbye to our friends and sailed out of St. Davids Bay and to the east, to round the island of Grenada on the atlantic side. 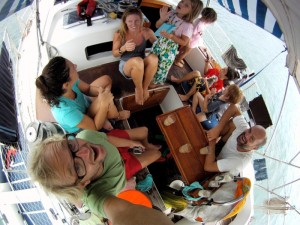 Big mistake ! In the beginning we had 5Bft. that increased to a steady six after a while. The swell was quite enormeous and together with a current of two knots against us, it was too much. After two hours of tacking against, we turned back to have a few drinks with the friends we left in St. Davids bay.

So after a nice evening and a quiet night we’ll now give it another shot. This time, we take the west side of the island. Hehehe.