After two days in Raiatea we said good bye to our friends and set sail again. We had a beautiful cruise through the lagoon that connects both Raiatea and Tahaa. In the north-east corner of the lagoon we found a free mooring in the lee of a little motu and spent the night there. There was too much wind and the distance to the motu too big to row there with our dinghy so we went snorkeling and spent the night there. 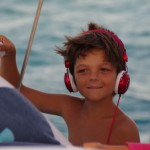 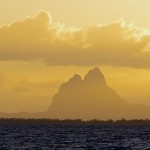 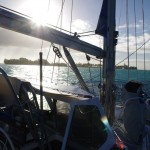 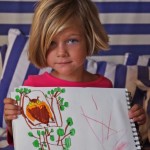 Next morning we got up early to continue our round trip of Tahaa. Unfortunately a winch stopped working right in the middle of a jibe and we managed to create a big sandclock with our Genoa. So we rolled it in as far as we could and searched for a little valley to drop the anchor and get the sail working again. A little wind from the front and a few tries of rolling in and out did the trick and soon after we continued sailing around and back south again on the west side of Tahaa. We exited through the pass in between the islands and found ourselves in the Pacific again.

Sailing towards BoraBora only took a few hours and just before sunset we sailed through the only pass on the west side and into a little anchorage in the lee of a motu where we found all our swedish friends again.

This entry was posted in LosLocos, Pics, Sailing, Suvarov. Bookmark the permalink.