Early in the morning, Bas was already awake and got his things together while the laziest crew of the world was still asleep. At seven then, the alarm clock went off and we had a final breakfast, bevor we set out with the dinghy to get our friend ashore. We’ve met so many nice people during the last weeks but we also had to wave goodbye to all of them.

We hope that our paths will cross sometime in the future – with Bas, who will be in Europe now and with our friends that are now underway towards French Polynesia. The latter suffer the same problem we will have tomorrow: no wind. But at least we have the advantage that we’ll sail along the coast and we also will probably make a stop somewhere. Maybe the Isla Cohiba. Let’s see…. Maybe the forecast is wrong and we can sail. But otherwise we definately have not enough diesel to cover the 360 miles that lay ahead of us. 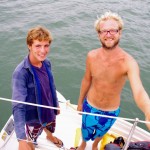 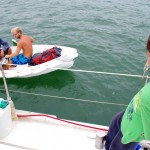 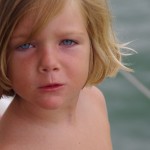 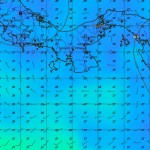 The rest of today we spent searchinf for new oars for our dinghy, shopping for fresh vegetables and fruits as well as a birthday present for Bruno, who will turn six in a few weeks. Probably we’ll re-schedule the celebration to party together with his grandmother, who will come and visit us in Golfito.

Well, there’s not much more to say. Next time I write, we’ll hopefully be underway towards Costa Rica.

This entry was posted in LosLocos, Pics, Rancho Relaxo, Sailing. Bookmark the permalink.