With all the work on the engine I completely forgot one of my favourite blog topics: the weather !

The marine weather report here in Fiji is quite funny: although there was not much wind during these last weeks, we were continuously warned of foul weather and heavy rain. When we had 15-20 knots, the marine weather warned of ‘rough seas’ sometimes even mentioned ‘very rough’ seas – even when the wind in this area wouldn’t even exceed 25 knots. I guess, the boys and girls from Fiji’s weather bureau don’t get out to sea much – otherwise they would know that it takes waves of four to six meters with breakers to qualify for a ‘very rough’ sea. Don’t get me wrong: I really appreciate them sending meaningful warnings out to the people cruising the oceans but if you shout ‘Fire ! Fire !’ all the time – no fire brigade will show up when it really burns. I know this analogy sucks but I guess you get my point.

A related story might illustrate it further: When we were cruising the Canary Islands in 2011 some overeager employee of the local authorities sent two DSC-alerts in front of *every* marine weather bulletin. This means that six times a day the whole crew is startled by the intense alarm of their VHF radio just because they send weather info. This resulted in most of the yachts turning off their VHF ! Fortunately we could revert to our handheld radio which doesn’t support DSC. Hopefully this dangerous and silly practise since has ceased. 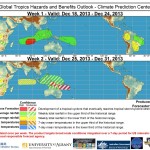 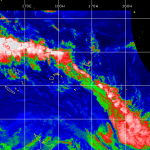 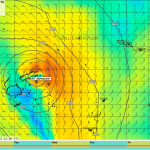 Well but now back towards the actual cause of today’s posting. One of the most important tasks of the local weather bureau is to alert the population in case of a cyclone. And right now there is no such warning. Although in my opinion, the situation is quite critical. Wikipedia lists six requirements for the development of a tropical cyclone:

Two additional factors are left out: El Nino, which has influence on hurricane activity – but this year is no El Nino event. And the Madden-Julian-Oscillation which seems to have massive influence on the frequency of tropical storms. In a scientific study done in 2009, the area of Fiji-Samoa-Tonga was investigated and the study came to the conclusion that in case of an active MJO there are five times (!!) more cyclones forming than during the inactive phase. The MJO develops in a 30 to 60 day rhythm in the indian ocean and then travels east. According to current observation, the MJO will reach our area during the next days. Although it’s not extremely active, it still enhances my alertness.

Let’s hope, Fiji’s meteorologists know what they do. I’d be happy if I’m proven wrong.

One Response to Tropical Cyclogenesis