Yesterday when we came from shopping and sat down in the shadow of a tree to have a snack, I saw a whale blow just in front of us – outside the reef. Yeah. It’s ‘humpback season’. And to get our chance we filled the tank of Lorenz’ dinghy and mounted the big (40hp) engine. Today right after breakfast it was our chance: a mother whale and her calf came right to the entrance of the Opunohu bay. 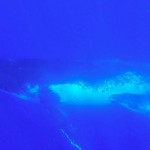 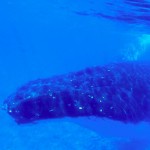 Ten minutes later we were in the dinghy and zoomed out towards the pass. We hopped in the water and only seconds later those huge, magnificent mammals were coming right at us. I could feel my heartbeat soar up and had troubles holding the camera still but still managed to make some shots. The whales went out to sea again and followed the reef to the north, towards Cook bay. Again, we parked the dinghy in front and hopped into the water. This time we were even closer – Lorenz and me had to swim out of the way to not get ‘run over’ by the mother whale. Puuuh ! And although they seem to move in slow motion, they still do 5-6 knots. We followed them out into the open sea as far as we could but then lost them. 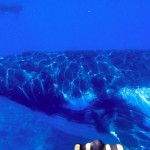 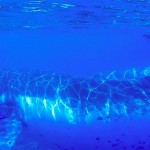 A memory for a lifetime. And a video to share with you: