Although the work on the ship(s) – isn’t finished, I’m currently telecommuting. Hehehehe. Wow. That’s definately a word from the last century. I had to think about it because working over the internet is so common, discreet nowadays – nobody even thinks about it. But here in the South Pacific access to the rest of the world (whichever way) is quite expensive. As a result there are no open hotspots. So I used the precious bandwidth to download all my work and setup the software locally. Finally, the webshop for Coquito gets some attention. 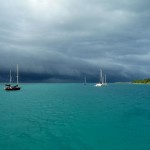 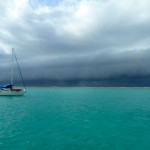 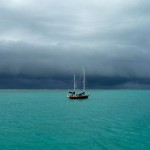 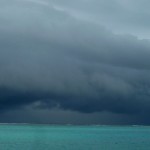 In the afternoon the wind drops, it’s getting too hot in front of the computer and I hop in the water. I’m quite perplexed as I look around and see the front that’s moving closer and is sucking in all the wind. I hop into the dinghy and row to shore, meet a friend, get a baguette, some apples and 10 minutes later I’m back on bord.  The neighbors are also starting to move: Pascal is strapping his dinghy down on deck and Lawrence removes the sun roof. 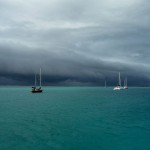 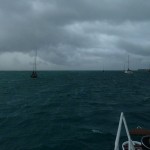 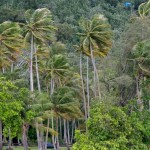 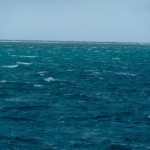 A few minutes later, the wind hits, but the anchor is well set. We’re in 4m of water with 40m of chain out. That’s quite safe. I go inside, cook something and two hours later the front has passed. Those little squalls and fronts become more common in the last weeks. I guess the rainy season is now at it’s best. Or to say it differently: the watertank is – and stays – always full. Nice.

This entry was posted in Observations, Pics, Sailing, Suvarov, Work. Bookmark the permalink.

One Response to Passing through